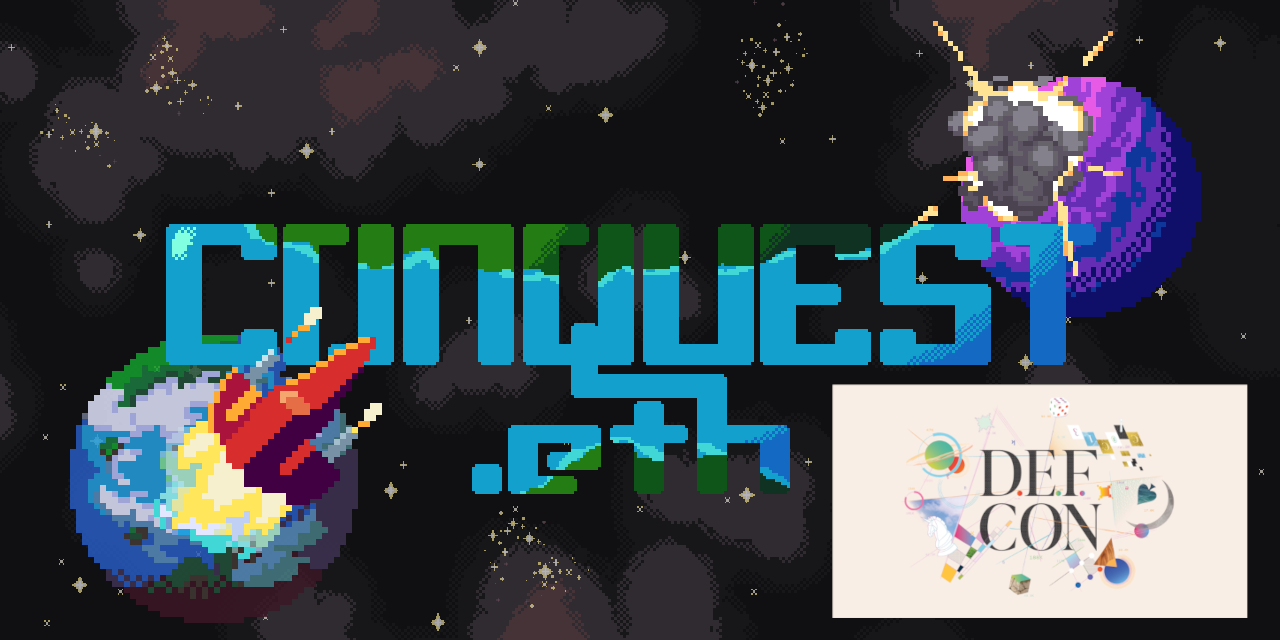 Hey all, A lot has happened since the last update in February. Not only did we launch our beta on Gnosis Chain and got amazing feedback, we also, soon after, launched Conquest.eth Defcon edition, a version of conquest that fit’s our vision: a permission-less and persistent game of diplomacy.

Let’s go in the details:

As mentioned in our last update, the plan was to launch our first beta on Gnosis Chain in March. We did it and were very pleased with it! It runs impeccably on Gnosis Chain with very low costs. The gas price spiked at the beginning and we had to adjust the agent-service worst case scenario, but even with that the game could run confortably with very small topups.

The beta was a blast to watch. Alliances formed rapidly and reaffirmed what the other alphas taught us, conquest is first and foremost a social game. One of the alliance, 0xrisk created its own discord server and managed to bring in a variety of players that did not know each other. They did well and this was amazing for us to watch it happen in real time. One of the member (fraser) even created a specific website to better coordinate: Conquest.eth Stats.

dEx3p who created the discord shared how he found the game here:

Small thread about the marvel of finding a cool new Blockchain game, becoming involved as Beta tester, setting up our first on-chain Alliance which is now slowly, but steadily evolving into a Guildao.

The beta was an oportunity to fix gameplay issues found in the last alpha as mentioned in our previous post. Specifically we improved upon with a mechanism to prevent planet holders to become invincible. Introducing the concept of upkeep, giving a debuff to planets that hoard spaceships. For this launch we succeeded in implementing this fix but it also produced new minor problems.

The beta was also the oportunity to test the game in a more realistic setting with the ability for players to buy spaceships from each other with real XDAI. Some players even made money out of that, without the need to get in the top highscores!

On that note, the beta scoring system had it’s issues. It encouraged players to basically accumulate their stakes into one player account so they could collectively earn more by being in the top score. Furthermore, the distribution of free fake token could not prevent someone from creating multiple accounts and benefit for more token than other players. We have no way to know how many of such account there is, but we feel that it was the last time we could offer such mechanism of entry. These 2 issues are actually specific to round based reward though and do not reflect on what conquest actually is.

Which brings us to our next chapter.

Conquest.eth is a permission-less and persistent game

We were lucky to be invited to talk about conquest at DEFCON, organized by 0xParc and the dark forest team. The event was part of devconnect week. There was some great talks there. Not sure when the videos will be available but we were very impressed by what was shown, including the presentation by topology of their ”factorio meets kerbal” game, Issac. We also enjoyed Justin’s talk about its upcoming on-chain game building block: Lattice. It was also interesting to hear about some of the history of dark forest. All of this made us very excited for the future of on-chain gaming. The landscape has changed significantly since 2018 when we started re-explore onchain games and we can only see it expand from then on.

For our DEFCON presentation, we decided (last minute actually) to do something special for the occasion. We were working on fixing the upkeep system, it was tough but we managed it and decided to launch the Defcon edition! This launch was the real deal, no whitelist, no end date. A real fully permission-less and persistent game!

Conquest DEFCON edition was launched that day and will remain active as long as gnosis chain is. You can play it here : https://defcon.conquest.etherplay.io/, More than 1,400 XDAI has been staked! The battles are fierce and fascinating to watch with various alliances forming.

Note that this version is still very experimental and has upgrade mechanisms so we can keep fixing issue and improve when necessary.

We would like to emphasis how important this milestone is. This is to our knowledge the first game running like a protocol. There aren’t many onchain games and apart from the early huntercoin, other games including dark forest, run in session, akin to traditional games.

Conquest has been designed from the beginning to run fully permision-less and open ended. Players can join and leave at any time. Plus of course, as an onchain game, conquest is also interoperable. This basically makes conquest a protocol.

So while the term “metaverse” is still evolving, we believe conquest to be the single closest game to the term.

Because as mentioned, it is permission-less and persistent. This make conquest an independent reality. Many believe 3d/vr are an important aspect to the metaverse. We disagree because anybody can build any frontend for conquest. What matter is reality independence.

Conquest’s player base is growing and players are getting more and more excited. We would like to channel this energy the best we can towards benefiting the community in the best ways possible. We are enterring a new chapter for conquest.eth!

At devconnect, we had the chance to meet in person fraser and dEx3p. fraser built the standalone frontend for conquest mentioned above and he is also building his own game : Union Quest, check it out!. dEx3p, is the precursor of 0xRisk alliance. We chatted about conquest and crypto gaming in general. It was great to meet in person.

After devconnect, we decided to reach out to players who have actively contributed to the game with feedback and bug reports. We now have a channel for them and hope to help them build on top of conquest. Some of the members already helped setup Discord and Dework to get the flow going. Exciting time ahead!

We also started to publish more code in the open, including the agent-service. See our github organization account : https://github.com/conquest-eth/

Planning to open more as we go along.

Finally to reflect on change, we rebranded our Discord server to focus on conquest, rather than Etherplay. Join us here.

There are several things being worked on. First of all we would like to improve the UX. We also need to refactor the smart contract and update the frontend for it. We also have plans for some Avatar NFT collection. Something the community has been asking for and that we are keen to sneak peek soon! The NFT will not have an effect on gameplay to keep the game fair, but we are thinking of adding some visual elements tied to the gameplay. It could be a nice way to show-off your skills as a player.

Furthermore, as alluded in the previous post, we are planning to have an ERC20 token for conquest long term. Realistically this is probably going to see the light beginning of next year with the first official launch of conquest.

In the mean time though, we will be working on a new version with a refactored smart contract. We do not have a time-line yet, but the plan is to have it run in parallel of the DEFCON edition. The game should also be as close to the final release as possible.

We are super excited about conquest. Everything is getting more and more interesting with the community growing and always keen to bring feedback.

In the mean time, do not hesitate to join us on our Discord